Two-day MCE™ classes including charge theory and hands-on MCE™ use.

Membrane Confined Electrophoresis (MCE™) is a true first principle method for measuring the effective charge (z*) of macromolecules. A 20 uL sample is held in a cuvette sealed at either end by membranes (Figure 1). The membranes trap the macromolecules, while allowing water and solvent components past. An electric current is passed through the cuvette, establishing an electric field along its length. Charged macroions move in the electric field, but are retained by the membranes. The MCE™ optical system produces an image of the cuvette contents bathed in collimated UV light. A linear photodiode array (LPDA) provides up to 512 absorbance readings spaced along the cuvette. The resulting absorbance profile is a measure of the concentration distribution, c(x) along the cuvette. The MCE™ provides two complementary modes of sample analysis: Steady State Electrophoresis (SSE and Real-time Electrophoretic Mobility (REM). In SSE, a time-invariant concentration gradient is developed in the cuvette. In REM, the motion is monitored by a concentration boundary as it moves along the length of the cuvette.

The Spin Analytical MCE™ is uniquely capable of conducting steady state electrophoresis. In SSE, a weak electric field (approximately one tenth of that used in mobility measurements) is applied across the sample chamber. Charged macromolecules move in the field so that their concentration builds up at the bottom membrane. This concentration buildup is countered by diffusion which results in a flux of macromolecules in the opposite direction to the electrophoresis. At steady state, the flux of ions from the electric field is balanced exactly at each point by the flux due to diffusion. The resulting exponential concentration gradient c(x) is imaged by the MCE™ optics (Figure 2).

Because it uses a weaker electric field and does not result in abrupt concentration gradients, there are fewer solvent limitations for SSE than for mobility measurements. The equations describing SSE may be developed using a non-equilibrium thermodynamics framework.

By fitting the steady state concentration distribution, c(x), to equation (1), z* may be determined. The electric field, E, is determined from the current, cross-sectional area of the sample chamber, and conductivity of the buffer, equation (2). The temperature is obtained from the MCE™ temperature control software. Example data are shown in Figure 3. 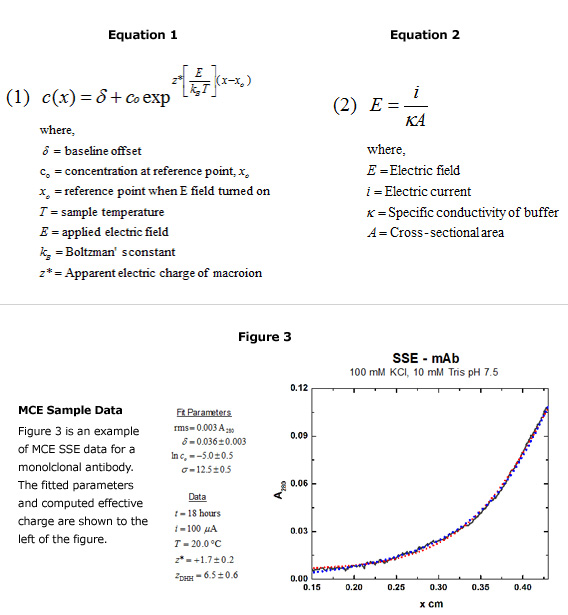 Aside from limitations that are a consequence of solvent interactions with the membranes (discussed below), the only drawback to SSE is that it requires significantly more time to conduct an SSE experiment than it does to conduct a mobility measurement. For a protein of Mw 150,000, the time needed to reach steady state is ~10 – 12 hours.

The MCE™ can measure the electrophoretic mobility in real time by measuring the time dependence of the sample concentration distribution when the electric field is applied. By using a stronger electric field than for SSE, the macromolecules are driven from one end of the sample chamber to the other in a few minutes. Intensity scans are acquired every 5-10 seconds, and the boundary is observed to move across the sample chamber with a velocity of I(x) (Figure 4 Panel A). Subtraction of scans removes systematic noise (Panel B), resulting in the time derivative dI(x)/dt (Panel C).

The velocity of the concentration boundary is used to calculate the electrophoretic mobility, μ, which is the ratio of the velocity to the electric field (equation 3). The electrophoretic mobility can be transformed into effective charge, z*, using the Stokes radius Rs which can be determined with a complementary technique such as analytical ultracentrifugation or dynamic light scattering summed with the Stokes radius of the macromolecule’s counterion. The effective charge, z*, may be transformed to the underlying protein charge, zDHH , using the Debye-Hückel-Henry equation, equation 5.

The effective charge, z*, is not the same as the charge on the macromolecule. In particular, z* incorporates the effects of counterion shielding (i.e. the Debye-Hückel ion cloud) and the counterion flow (i.e. the electrophoretic effect). The actual charge on the molecule is the value of z that gives rise to the Debye-Hückel shielding and the electrophoretic effect, resulting in z*. While z* is useful for comparing the charge of different molecules in the same solvent, it often is desirable to assess the actual charge on macromolecules in different solvents. In order to make these sorts of comparisons, it is necessary to correct z* for the Debye-Hückel shielding and the electrophoretic effect. While there are numerous calculations available to make these corrections, the simplest is the Debye-Hückel-Henry (DHH) formula, zDHH equation (5), where κ is the inverse Debye length, RS is the sum of the Stokes radius for the macromolecule and its counterion, and f(κRS) is Henry’s function, which depends only on the product κRS. In general, zDHH is accurate to better than 10%. More sophisticated and involved methods are available for conversion of z* to the macromolecular charge, however, these only provide a marginal improvement in accuracy. As a rule of thumb, κRS will have values near 2 and f(κRS) near 1.1, so that a rough approximation of zDHH may be calculated as 3∙z*.